Three seminary students get lost at night, stumble upon a farmhouse and ask the old lady for shelter. She agrees, on the condition that they sleep in different parts of her barn. She comes to one, Khoma, in the middle of the night and attempts to seduce him. He refuses — because she’s an old bag. Instead she puts a spell on him, climbs on his back and rides him around the countryside like a horse — a flying horse! When they land, he snaps out of the spell and beats the woman with a stick. As she’s dying to transforms into a beautiful young woman. He runs off to seek solace from his Rector who informs him that a rich merchant has a dying daughter — the woman he beat — and he’s asked for him by name to pray for her soul over the course of three nights. Else unstated severe punishment brought down from above.

There’s a lush and fertile weirdness running throughout Viy, directed by Konstantin Yershov and Georgi Kropachyov, that feels uniquely Russian — paced and rendered in a way that feels entirely other to our Western sensibilities. The specific color palette (assuming proper color timing on this disc) and the special effects by Aleksandr Ptushko, reserved for the film’s grand finale, surprised and delighted, a festive gathering of low-fi practical effects and rubber-suited weirdness.

Richard Stanley’s well-informed history of the vampire and the Russian concept of vampirism is an essential companion extra. The 22-minute interview with Stanley explains the folklore and deepens the film’s impact. Highly recommended viewing. Viy will also appear on the upcoming Severin folk horror box set.

Viy just became an early front-runner in my favorite Hooptober 21 first-watch. A wicked/sexy witch, three-crazy nights, and delightful practical effects made this simple story a weird and wonderful exercise in restrained horror showmanship.

I watched Viy on a Severin Blu-ray. 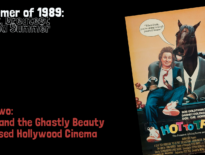