Nature of Shame:
Since I watched Blacula, I had to watch the sequel, Scream Blacula Scream. Obviously.

It’d be a more interesting story if I’d seen Scream Blacula Scream but not the original Blacula. Alas, I have no such story and predictably, prosaically, I’ve not seen the sequel. I do, however, as a copyeditor have license to question the title’s use of commas, or lack thereof. The vocative comma is necessary for direct address in the would-be title Scream, Blacula, Scream. That’s assuming, of course, that the title’s telling Blacula to scream — something I’m not sure we can assume since it shouldn’t be Blacula experiencing fear. He can’t even see himself in a mirror. How is he supposed to quake at the sight of his own visage. (The title actually comes to fruition by film’s end, but I’ll get back to that in a bit.)

If we’re to assume that his victims are doing the screaming, perhaps the title should have been Scream! It’s Blacula! (and then add that final Scream! if absolutely necessary. That scenario actually sounds more like the introduction of a late night talk show host a la “Heeeeeeeeere’s Johnnny.” I can’t deny that the title rolls off the tongue, but making heads or tails of its intentions is an entirely different matter.

I happened to glance at the MGM Soul Cinema DVD that I borrowed from the library and the title on that DVD features the vocative commas. (See cover art above left.) What ho?! Even though they’re not on any of the original poster art or in the movie’s title card, they appeared on the covers of the 2004 DVD and 2009 re-release. The title sequence from Art of the Title: A dying voodoo queen chooses Lisa (Pam Grier) as her successor, overstepping her son Willis (Richard Lawson) and legitimate heir. To get revenge he buys the bones of Blacula/Mamuwalde and resurrects the vampire to do his bidding. Fatal flaw in his plan, however — Mamuwalde comes back to life and bites his petulant ass, turning him into a subservient vampire. Just follow this next part to the best of your abilities because it’s about to get bumpy.

Justin, an ex-cop with a collection of African antiquities, investigates Mamuwalde’s murders. The two meet at a party, discuss his artifacts, and Mamuwalde spots pieces of jewelry worn by his late wife. At this same party (dude obviously knows how to party), he meets Justin’s girlfriend — the newly christened voodoo priestess with the afro that launched a thousand ships — and asks for her help in lifting the vampire curse placed upon him by Dracula. Mamuwalde has to evade Justin’s investigation and protect Lisa from his ever-increasing vampire army if he has any hope of resting peacefully. In his review, Roger Ebert wrote that the film shows evidence of having been made in a hurry with limited funds. And the first one was what, exactly, if not a cheap production made fast and cheap to capitalize on fleeting cinematic trends? I don’t always agree with Roger, but he usually makes some kind of sense.

Scream Blacula Scream, if nothing else, has the added benefit of Pam Grier — who amplifies production quality just by appearing on screen. As Lisa, she’s an ideal counterpoint to William Marshall’s sympathetic villain — a confused voodoo priestess who’s just coming into control of her powers. The camera worships her just as William Marshall works the lens to magnify his powers of audience seduction, directing a version of male gaze inward and outward at the same time. It’s not a gaze of the leering variety. Through the movie’s perspective (and the perspective of most vampire films), this gaze craves control and places the viewer on the same wavelength as Mamuwalde.

Mamuwalde seeks control over his curse. He’s Dracula’s disciple, a monster created by a racist European, and must manage his thirst for blood in order to win the sympathies of Pam Grier’s voodoo priestess. The movie’s greatest bits of trickery? Withholding Pam Grier so that the audience also desperately craves her return and the fact that Scream Blacula Scream actually more resembles a story about addiction than a 1970’s cheapie horror film sequel.

I’m not going to tell you how to read the film — and I can’t even claim to know with any certainty that the filmmakers had this in mind when they made Scream Blacula Scream. Directed by Bob Kelljan (Count Yorga, Vampire — a movie with an appropriately placed comma) and written by Joan Torres, Raymond Koenig, and Maurice Jules, Scream Blacula Scream offers a much tighter production than its predecessor, but also a more ambling narrative. Without building predictable horror beats, Kelljan has made a character study about Mamuwalde overcoming bloodlust to save his soul. We’ve seen dozens of stories about conflicted vampires. Scream Blacula Scream, by emulating and riffing predictable horror tropes without the ultimate gory payoff, transcends genre even as it cannot escape its considerable era-specific Blaxploitation style. The result? A dated sense of sameness consistently undermined by the movie’s stubborn resistance to convention. Mamuwalde struggles against his nature (rampant, random bloodsucking) in order to remove the shackles placed on him by his ersatz slave master. He must feed, but he also must struggle against his cravings to preserve his relationship with Lisa. Without Lisa he cannot be liberated. Without blood he goes mad. It does not end well.

I don’t mean to spoil the outcome I teased with my comma argument earlier, but there is a moment at the end of the movie where Blacula does indeed scream. His fate left uncertain, his soul still without rest. I suppose it’s not-too-spoilery to state that the addiction wins in the end. Mamuwalde will continue to hunt the blood of the innocent, just as most addicts return to their drug of choice, alienating friends and family until no one is left on their side. Where Blacula felt cheap and generally routine, the sequel waltzes around without a direct through-line from one scare to the next. This might sound like a backhanded compliment, but Scream Blacula Scream marginally and universally improves upon the original. It looks like a horror movie, but it doesn’t act like, well, much of anything in particular. If you like your horror-ish movies aimless but with a heap of swagger, you should check your resistance to movies without the appropriate vocative commas (but please try to control your thirst for Pam Grier) and give this Blacula double bill a viewing. Scream Blacula Scream is available on a Scream Factory Blu-ray alongside Blacula. 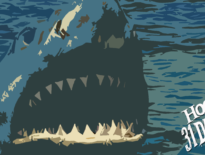