Nature of Shame:
I paid a gazillion dollars (okay, maybe $40) for that Limited Edition 3-disc set and I still hadn’t watched the damn thing.

People love this movie. Nah, man — I don’t think you understand — they straight worship Nightbreed. Yet, at the same time, there’s a lot of meh going around about this very same movie. I wanted to find out, once and for all, what all the fuss (or lack thereof) was about. I unwrapped my Limited Edition and cringed considering all the dollars this viewing would cost me on the secondary market if I wound up not exactly loving this movie.

Breathe. You’re not a flipper. You’re a watcher. You can do this. A psychotherapist, Dr. Decker, convinces a “troubled” teen named Boone that he’s a serial killer. After an unfortunate turn of events, the teen winds up in Midian, a halfway house for undead beasties called the Nightbreed and yada yada yada Dr. Decker turns out to be the serial killer and Boone turns out to be some sort of Neo/Anakin Skywalker figure that will bring balance to the force and replace Midian with some sort of new sanctuary / pave paradise and put up a parking lot, but only if the Nightbreeders can hold off a gang of rednecks, police and Dr. Decker.

[Meanwhile all of the would-be Nightbreed producers have now left the elevator and I’m pitching my movie to a mustachioed pear of a man who claims to be Joe Eszterhas’ AD. He says he just went to get him a cup of coffee so he could put a polish on that Basic Instinct 3 script. I apologize to him for the terrible elevator pitch. He shrugs and says “Mr. Eszterhas is just going to throw this cup of coffee on me when I get back to the office anyway so all this was a pleasant distraction from the horrors of my daily life.” I apologize again. I note that he’d pushed 22. So I hit 20 and get off at the next stop, thankfully free from the claustrophobia two extra floors on that elevator.]

On the off chance that you’re unaware of the classic Warren G / Nate Dogg track “Regulate,” I felt obliged to insert it here for reference.

“It was a clear black night, a clear white moon
Warren G. is on the streets, trying to consume
Some skirts for the eve, so I can get some funk
Just rollin’ in my ride, chillin all alone”

Clive Barker’s imagination knows no bounds. His novels bear the trademark of a man with more ideas than he can conveniently wrangle into a single body of work. Nightbreed, likewise, is the product of wild invention without a sense of grounding. Unbridled ambition without a voice of reason. A movie adaptation of a novel that refused to kill any darlings. The Midian concept — a gathering of unique and eccentric “monsters” in hiding from the world — could have filled dozens of movies or comics or years of a television serial. Based on Barker’s novel Cabal, Nightbreed feels like the origin story for an entire comic book universe. (Epic Comics released 25 issues to expand upon the film’s mythology and Boom! Studios picked up the baton with 12 issues starting in 2014. ) Broad and unfocused, but with hundreds of idiosyncratic moments of genius scattered about to tease the many ways in which the Nightbreed universe could spiral outward.

The most confounding part of Nightbreed is that our main character (Aaron Boone) is the dullest of the dull, the drabbest of the drab. Craig Sheffer, the milquetoast Brando through which we are supposed to view the mystical realm of Midian, is the everyman with which we can’t possibly relate because holy hell if that lifeless and expressionless lug represents my point of view I’d rather just become an Insurance Adjuster. What else could I possibly do?

Everything outside Craig Shefferland, however, sparkles with Barker’s creative vision. Rachel and Babette. Shuna Sassi. Paloquin. Kinski. The monster with the external stomach. Barker alludes to rich and meaningful backstories to all of these characters, and I desperately want to know more about all of them. Instead we’re stuck with Craig Sheffer, the guy that once stole a Snickers from a Seven Eleven and calls himself a rebel even though, in reality, the owner gave him the candy bar because it was Halloween. UGH. It’s not that I think Sheffer’s a terrible actor — he was just terribly miscast. The casting so flummoxed me that I took to Twitter in the middle of the movie to vent. Happily, I found that I wasn’t alone in my judgment of Sheffer as a charisma vacuum.

I don’t know if I understand why it never comes together yet. I’m watching and I note that this, this and that are pretty interesting, but I just have zero interest in the overall outcome. Right now I’m blaming Craig Sheffer.

You could compile a book of those characters.

Then we could publicly burn the book.

This is an essential holiday movie-fan gift if there ever was one.

Oh man. The possibilities. I’m going to have to stew on this because I don’t want to sacrifice merely moderately bland protagonists.

Less a horror film than a nightmarish fantasy film, Nightbreed taps into so many interesting ideas I can see why it’s beloved. I just can’t share their enthusiasm — though I would like to dig more deeply into Barker’s inspiration.

The religious connotations of “Midian” would keep me busy for at least a week. Despite my limited frame of reference, biblically speaking, I was aware of Midian as the land in which Moses self-exiled. After a smattering of research I’ve uncovered more reference and iconography that went right over my head. This extra stuff interests me more than anything actually contained in the film. The exception being David Cronenberg’s villainous Dr. Decker — a villain worthy of a far greater narrative than Nightbreed. Brooding, crazy-eyed Cronenberg took me totally by surprise. I saw his name in the credits and assumed “bit role” or “stunt casting,” but this Cronenberg fellow passed up a career as any number of truly unsettling cinematic sociopaths.

I’m mercifully ending this bl-g post now. Nightbreed is perhaps the most ambitious comic book origin story about the most boring superhero in the entire universe. If Shefferman had more ambition or seemed more plausible as the Jesus-like savior of a beleaguered, mistreated population of undead personages I’d have had warmer feelings toward Clive Barker’s creation. I didn’t dislike Nightbreed; I just didn’t think the narrative lived up to the limitless potential. High concept, medium execution, bargain-bin leading man. Bonus points for extreme difficulty.

It should be noted that I watched the Theatrical Cut and sampled particular, notable segments of the Cabal Cut. Shout Factory released a single-disc Director’s Cut Blu-ray as well as the three-disc Limited Edition featuring the Director’s (Cabal) Cut and the Theatrical. I sampled a few of the bonus features. Die-hard fans of the film would no doubt enjoy the bevy of bonus features on the 3-disc if they can get their hands on a copy. 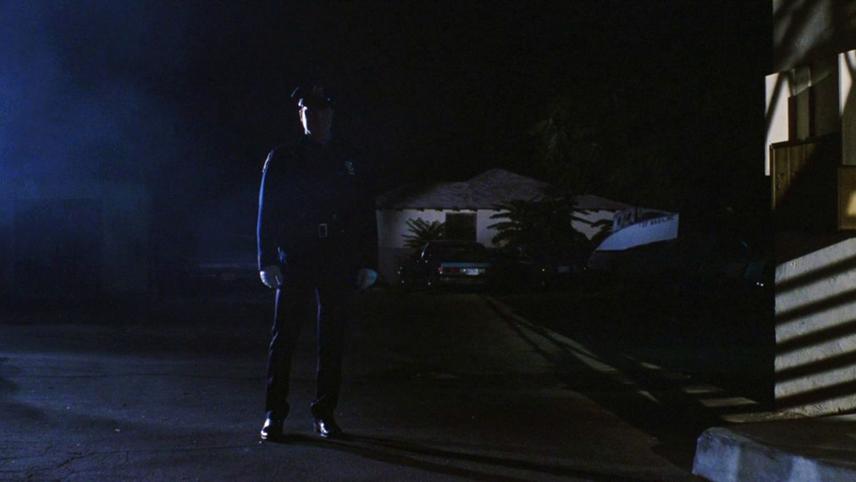