Nature of Shame:
Unwatched Hammer Films adaptation of Sherlock Holmes’ most horrific tale? Hound of the Baskervilles starring Christopher Lee and Peter Cushing? On an Arrow Films Blu-ray? FOR SHAME.

I’ve never seen a Hammer Horror movie I’ve actively disliked. Some are better than others, but even the bad ones serve as comfort cinema. Garish warm and fuzzies foregrounded against shadowy Victorian set design and nightmarish things that go bump in the night. Consistent and sincere on-screen talent that inhabit even the most nonsensical premises. Horror Express, as one example, should be C-grade trash, but the stable of Hammer thespians buys into the absurd premise, legitimizing high concept drivel.

Hammer Horror takes amorphous secondhand nonsense, molds it, shapes it, and makes high-ish art. On this occasion, however, Hammer has accosted one of the most respected stories in the Sherlock Holmes canon. Though Sir Arthur Conan Doyle wrote pulp literature, the Holmes tales have achieved elevated literary status. What would Hammer do with respected literature? Elementary, my dear Watson. Hound of the Baskervilles Elevator Pitch

A supernatural family curse threatens a stodgy nobleman on his newly inherited estate. The stodgy nobleman calls Sherlock Holmes in to investigate the mysterious howling from the moor.

Conan Doyle’s The Hound of the Baskervilles novel — Holmes’ first literary appearance in eight years after the character’s supposed death in “The Final Solution” — has been adapted more than 20 times for film and TV. Germany produced the first, a four-part silent serial called Der Hund von Baskerville with an actor named Alwin Neuß. The loose adaptation is now best known for Karl Freund’s cinematography and a Great dane that played the role of the menacing hound with amiable pluck and a generous tongue.

Sidenote: Karl Freund photographed some notable films by the name of Metropolis (1927), The Last Laugh (1924), and Dracula (1931) among many, many others. The perpetually innovative cinematographer  invented his own film stock for shooting in low-level lighting, the unchained camera, and later in life, the three-camera setup for scripted television. He’s a deal. He also directed The Mummy (1932).

It wasn’t until 1939 that Daryl Zanuck and 20th Century Fox produced the first respectable adaptation of The Hound of the Baskervilles starring Basil Rathbone and Nigel Bruce — the pair’s first of 14 Holmes adaptations. Rathbone wasn’t even first-billed. That honor went to the film’s blank-slate lead Richard Greene.

Peter Cushing picked up the deerstalker in this 1959 film adaptation directed by Hammer mainstay Terence Fisher. When the film went into production in 1958, Hammer Films hadn’t yet committed to the horror genre, having spent its first two decades developing comedies and thrillers. The surprise success of The Curse of Frankenstein (1957) led the company down a path of gothic retreads of moldy Universal shockers.

The Hound of the Baskervilles is Actually a Dog! #SpoilerAlert

The film embraces its literary roots with prose reading of the legend of the Hound. True to Hammer’s horror legacy, however, we’re soon treated to Sir Hugo Baskerville stabbing a servant girl on a druidic alter before being mauled by the Hound of legend. The scene serves as a quick shock, a blast of attempted gang rape, murder and dreamscape executions. It’s unlike anything we’ve seen in a Holmes adaptation; leave it up to Hammer to push the boundaries of decorum in the opening volley of a Sherlock Holmes adaptation. Nothing else in the film registers the same key of violence — but even in 2018 it’s a shocking hook, one that must have been positively jarring in 1959.

After the opening scene, The Hound of the Baskervilles settles into more deliberate but sumptuous jurisprudence as Holmes and Watson first meet Sir Henry Baskerville and weigh the merits of the beguiling case.

Christopher Lee, in one of his earliest speaking roles, plays Sir Henry Baskerville with confident, detached erudition. He’s above the rumors, above the supposed curse — but something is, no doubt, amiss. It’s Cushing and Andre Morell that most impress as Holmes and Watson. Cushing’s intensity portrays a man on the edge of dark philosophical precipice, unlike the clinical Rathbone. Cushing’s inner demons paired with Morell’s military precision make for arguably the best on screen duo to portray Conan Doyle’s protagonists.

That Holmes seems fit to snap at any moment makes the character feel entirely unpredictable. The liner notes of the Arrow Blu-ray mentions that critics have noted Cushing’s Holmes straddles his Van Helsing — due to the spiritual darkness imprinted on the character. An element absent in the text. In this Hound of the Baskervilles, Holmes repeatedly references the powers of darkness, alluding to spiritual or purely evil powers outside the realm of man’s understanding.

The eccentric element of Conan Doyle’s The Hound of the Baskervilles text that often plagues adaptations is the disappearance of Holmes from this Sherlock Holmes story. Once Holmes takes up the case, he sends Watson to live with Sir Henry at the Baskerville estate in order to protect and observe. This forces Watson to become the lead detective, forcing an uncommon amount of screen time on a supporting actor. As much as I enjoy Nigel Bruce’s comic relief in the Rathbone adaptations, he’s ill equipped to carry a Sherlock Holmes film. The 1939 The Hound of the Baskervilles feels for a brief moment like a precursor to a Scooby Doo mystery with Watson bumbling around the moors. Morell meanwhile shepherds the film without guffaw until Holmes dramatically returns just past the midway point of the film.

I consider it a minor crime against humanity that Hammer never followed up The Hound of the Baskervilles with another Cushing/Morell Holmes adaptation. Anthony Hinds, son of Hammer founder Williams Hinds, claims that the studio had never intended to carry on the Holmes legacy. They had negotiated specifically with the Conan Doyle estate for the rights to The Hound of the Baskervilles precisely because it was the only Holmes story that fit their aesthetic.

Fans of The Hound of the Baskervilles would do well to seek out Hammer’s Plague of the Zombies, for which screenwriter Peter Bryan reworked his own Hound of the Baskervilles screenplay. Fisher also directs Christopher Lee as Sherlock Holmes in 1962’s Sherlock Holmes and the Deadly Necklace, an Italian-German-French co-production — definitely not Hammer related, but interesting nonetheless. Final The Hound of the Baskerville Thoughts

Beyond Cushing’s Holmes portrayal and the tempered fits of blood and violence, The Hound of the Baskervilles adds a few notable Hammer-style film elements to the source material. It’s fun to play “What did Hammer add?” as you watch along with the film to see how well you remember the novel or the earlier adaptations.

Certain detractors call this one a “bore,” but I vehemently disagree. Hammer Horror rarely relies on outright violence or titillation to thrill the viewer. They focus on character and the build to catharsis through dialogue and mood. Set design and cinematography plays as integral a role in The Hound of the Baskervilles as any overture to sex or violence. Does anyone use the color green better than Hammer?

Obviously latter Hammer Horror put it all out there  — and that’s a different brand of entertainment — but in 1959, outside that opening flourish, it’s about the art of the tease — and the thrill of the hunt.

The Hound of the Baskervilles Rating:

Twilight Time released Hound of the Baskervilles on Blu-ray in Region A. You can purchase these directly from Twilight Time or from Screen Archives. (You’d do well to wait for a sale.) You can also pick up some used ones on the Amazon site. I viewed the Region B Arrow Films Blu-ray, which can be procured more cheaply from the Arrow site (especially during their sale throughout the month of October). 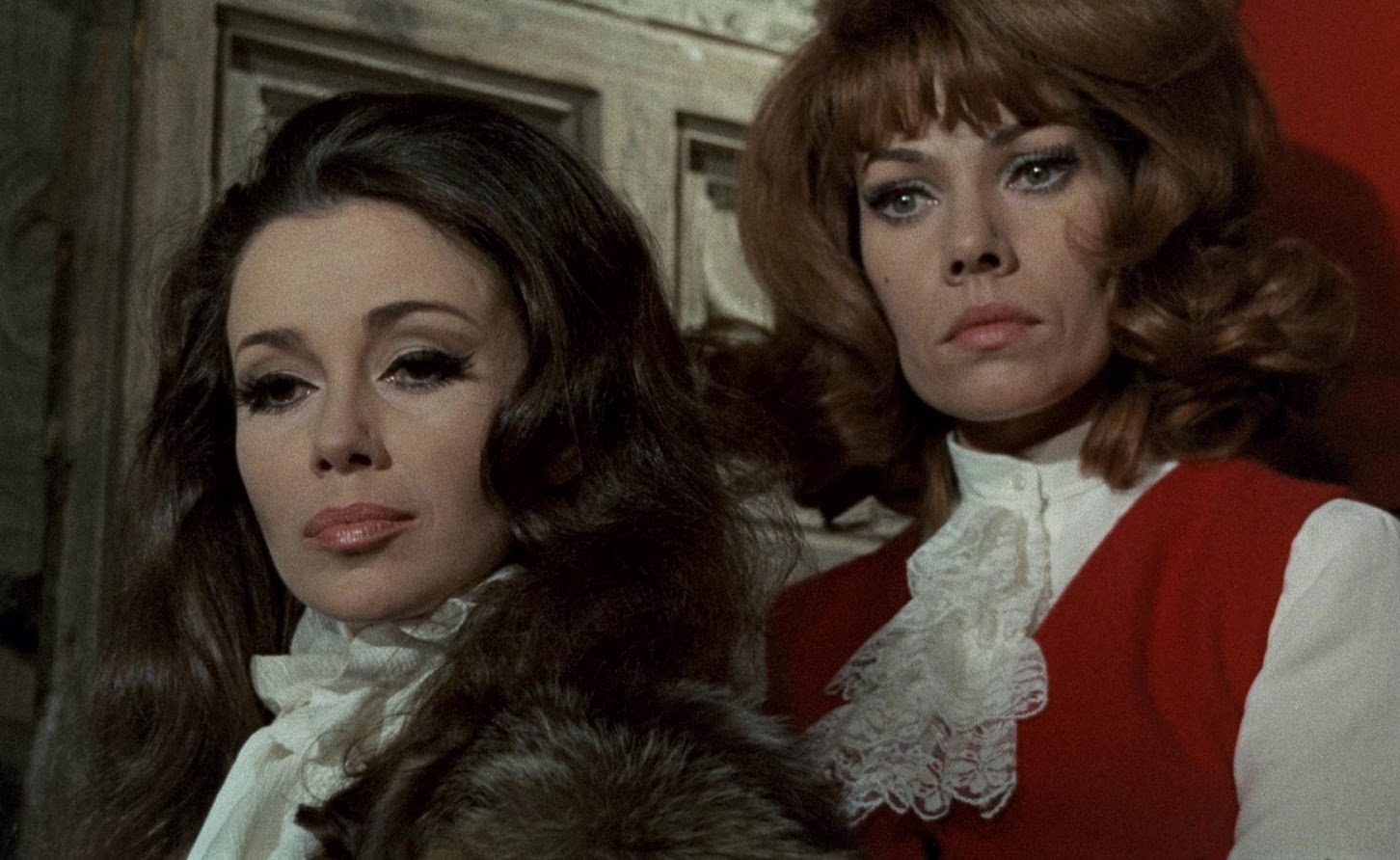