Nature of Shame:
Trudging my way through the intermittent (and extremely relative) joys of the Friday the 13th series. Bring on Friday the 13th Part VII because it’s the next one and this time I’m actually looking forward to it!

For the first time in this Friday the 13th saga, I felt enthusiasm for viewing the next film in the series. How many times can anyone say that the 6th movie in a series made them a believer?

Seriously, though. Has anyone ever muddled through five films to enjoy the sixth? Police Academy? A Nightmare on Elm Street? I’m at a loss. This next entry arrived via Netflix DVD and here’s the little red envelope to prove it. A pscyhokinetic, guilt-ridden teenage girl named Tina inadvertently unshackles Jason from his water grave in Crystal Lake after a creep psychiatrist intentionally agitates her with the intention of somehow vaguely exploiting her psychic powers.

So how does he intend to exploit her?

You have no idea.

Tina must then learn to harness her powers in order to subdue the rampaging supernatural prometheus before he kills and kills again. Maybe more of a Thursday?

At this point I’ve written more unnecessary words about the Friday the 13th series than just about anything else. I’m not part of the in-crowd; I prefer my slashers weird and Italian. And until just recently I wouldn’t have recommended any of the films in the series for anyone not already indoctrinated into the cult of Jason.

Since we’ve come this far, however, I’ve no qualms about saying if you tried Friday the 13th but gave up after a few entries, re-join the party with Part VI and Friday the 13th Part VII. Where VI aims for greater respectability and production value, Part VII feels indirectly inspired by the manic energy of Evil Dead II (1987).

Paramount Pictures had originally wanted Part VII to be a crossover with A Nightmare on Elm Street, bringing Freddy Krueger into the fold. The two sides failed to agree on terms, but screenwriter Daryl Haney instead came up with the idea of pitting Jason against a “Carrie” — a girl with telekinetic powers, apparently dead set on a monster vs. monster type crossover. Associate producer Barbara Sachs took this lazy premise, and according to Haney, aimed to win Academy Awards. Most unbelievably, the production team reportedly batted about candidates like Federico Fellini to direct Friday the 13th Part VII to show how serious they were about crafting high-minded schlock. When that Fellini thing fell through (shocker), Sachs had to settle for John Carl Buechler — who also had a unique vision for Jason, even if it wasn’t especially tied to certifiably insane goals like Academy Awards for Jason Voorhees.

Despite Oscar intentions, Friday the 13th Part VII feels tonally schizophrenic from the very beginning, consisting of maybe a dozen partially-thawed frozen turkeys. There’s a bite from Jaws when Jason drags a skinny-dipper down underwater. The ghouly, maggoty Jason — especially after the removal of the mask — takes a page right out of the Evil Dead makeup effects. The Carrie elements and the shady psychiatrist (played by Terry Kiser aka Bernie Lomax) feel completely tacked onto the standard Jason-murders-a-houseful-of-horny-teens script. They just happen to live next door!

The teens that Jason rips through like a fun size package of Cheetos have no life or individual flavor. They’re balloons just waiting for the POP. There’s some sort of nerdy-girl She’s All That makeover, some unreal mean girling, and a whiny sci-fi author that makes George McFly look more Rudolph Valentino. To top it all off, Tina uses her vague and amorphous psychokinetic powers to see the murders before they take place — but her visions are totally different than the actual deaths. I don’t have any special powers of foresight but I could have told her exactly which characters were going to be dead by the credit roll, too.

And then we get to the extended Jason vs. Carrie climax of the film. I mean Jason vs. random psychokinetic Tina and definitely not Carrie the Stephen King property. I mean Frankenstein’s Terminator vs. Firestarter Tina. Just toss it all in a bingo wheel and see what shakes out.

And this is where I take this bl-g post in an entirely different direction. Friday the 13th Part VII is a disasterfest of misguided ideas, but in as much as it gleefully flaunts the standard “rules” for a Friday the 13th movie I can’t help but be entertained by this disconnect. The climax of the film where Jason takes on Tiny takes on a life of its own. It’s a self-contained showcase of practical effects and makeup. Jason loses his mask and the scarred, maggoty face remains on display. Kane Hodder, the stuntmant playing Jason in this entry, endures a then record-breaking 40-second burn. He’s engulfed in flames for so long, I was convinced it had to be some sort of animatronic trickery. In this finale the film gleefully flaunts its B-movie status. There’s no attempt at high-minded entertainment. This is wacky C-grade schlock begging you to be entertained.

Yes — it’s clear that the more extreme moments of violence were cut to appease the MPAA. It’s also clear that the filmmakers behind this movie actually had no handle on the kind of movie or homage or rip-off that they wanted to make. I compare Friday the 13th Part VII favorably to the similarly unfavorable Part V. Both are heinous messes, but part VII remembers to have fun with the format rather than just trying to push the exploitative elements to the extreme.

Friday the 13th Part VII is available on Blu-ray and DVD. 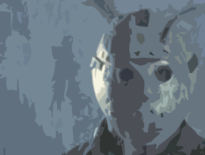