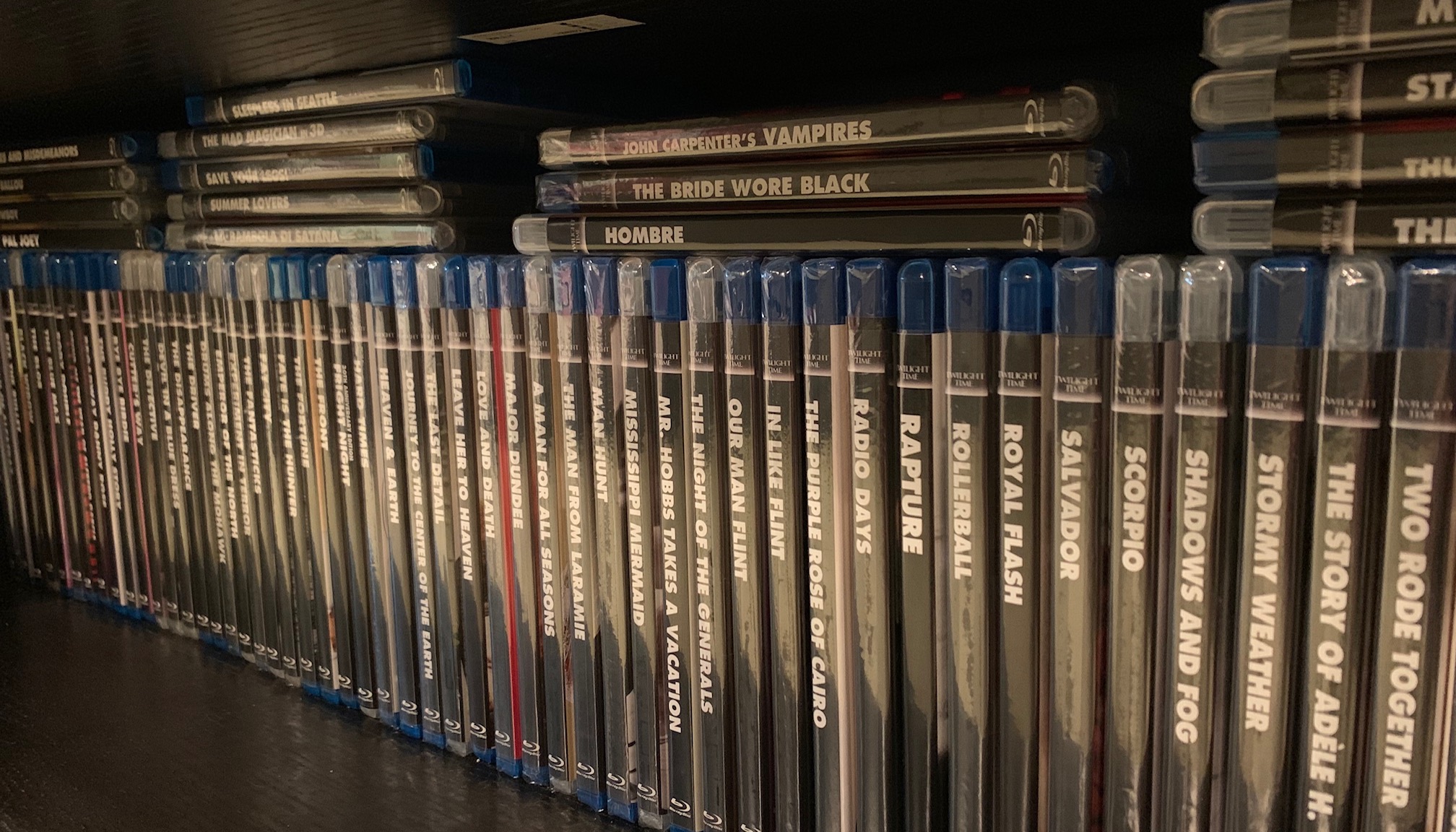 Throughout the month of September, Twilight Time is offering a sale on all but its most recent titles. If you’re unfamiliar with its business model, Twilight Time wooed studios that were hesitant to allow the distribution of their catalog by third party distributors by capping the total available units of each title to 3,000. Nick Redman and Brian Jamieson began operation as Twilight Time in 2011 to tap into classic films from the back catalogs of major studios. Of their mission, Jamieson said, “Twilight Time will be serving both the collectible drive of film enthusiasts, and, in a larger sense, the cause of cinema literacy.”

Redman and Jamieson brokered their first deal of 20 catalog titles with 20th Century Fox, and Fox has long been a major supplier of essential Twilight Time releases. This led me to put my concerns about Disney’s acquisition of Fox on paper in this post from two days ago.

After the passing of Nick Redman earlier this year, fans of the label were concerned about Twilight Time’s future. Not only was he responsible for bringing the titles to Blu-ray but he also appeared on dozens of commentary tracks. The Disney deal further clouds Twilight Time’s future in the minds of fans and physical media enthusiasts. It wouldn’t be at all surprising if we never see any of Twilight’s Time Fox titles on DVD/Blu-ray again. Once these titles sell out, they’re probably gone for good. With that in mind, let’s take a look at some of the Twilight Time essentials you should consider picking up during this latest and greatest sale.

Stormy Weather* (1943) – only available at ScreenArchives.com

A 20th Century Fox property with only limited copies available. This 1943 musical with an African-American cast is based on the life of Bill “Bojangles” Robinson and features performances from Robinson, Lena Horne, Cab Calloway and Fats Waller. Fred Astaire said that the “Jumpin’ Jive” dance sequence was the greatest movie musical number he had ever seen. Stormy Weather will make you lament Hollywood never made twenty movies just like it.

Based on the successful Broadway play by George Axelrod, this satire starring Jayne Mansfield, Tony Randall, Joan Blondell (and many others, including a cameo from Groucho Marx), Frank Tashlin’s film skewers fan culture, advertising, and the Hollywood hype machine. Blessed with a bevy of comic talent and timing, Will Success Spoil Rock Hunter? is a heady movie with plenty of laugh-out-loud set pieces.

The Train (1964) – only available at Screen Archives

After a quick sell out during its first run, Twilight Time brought John Frankenheimer’s adventure thriller back for an encore performance. Burt Lancaster is a workaday World War II-era trainman charged with preventing a cargo-load of irreplaceable French art is not allowed to leave the country for Germany. Beautiful Jean Tournier black and white cinematography and Maurice Jarre score.

The romantic highs and lows and everything in between. Mark (Albert Finney) and Joanna (Audrey Hepburn) take annual road trips through France and the film assembles these trips non-linearly in order to tell the story of how the couple met through present day bitterness. In his commentary for the film, Stanley Donen mentioned that couples often tell him that this movie caused them to get married — but just as many say that it caused them to divorce. Bonus: Henry Mancini score and Maurice Binder title design.

John Huston directed this naturalistic neo-noir boxing drama that might just be the American classic you’ve never seen. An alcoholic past-his-prime boxer Billy Tully (Stacy Keach) wants to get back into fighting form and spars with an up-and-coming 18-year-old kid named Ernie (Jeff Bridges). Billy puts Ernie in touch with his manager and expects the kid to rocket to stardom. Shot by Conrad L. Hall, the film’s unglamorous visuals mirror the state of its characters. This movie could easily be interpreted as a reflection of the Hollywood career of John Huston (who was also a former boxer) who, by this point in his career, had been put out to pasture by the Hollywood gatekeepers.

A personal favorite heist comedy features 1972 Robert Redford, George Segal and Zero Mostel and was curiously not a success when it was released. Lighthearted and driven by a painfully clever William Goldman screenplay, The Hot Rock should be a considered a classic of the genre. The film boasts not just one big caper — but four(!) because the characters keep bungling the job. Director Peter Yates considered this one of hist best movies and superior to his driveaway success, Bullitt.

Because @HouseofGlib says so. Also, I thought this was sold out and omitted it from my first list. Essential Vincent Price horror comedy that features Price as a humiliated actor seeking revenge upon the critics who failed to see his genius. Diana Rigg considers this her best film! The pure joy of watching Vincent Price merge Shakespeare and bloody Phibesian revenge is a gift that keeps on giving.

Sam Peckinpah at his most raw, nihilistic, poetic and unrelenting. This is another former TT sell-out title that’s been brought back because people need to see this movie. Almost universally panned at the time of its release, Bring Me the Head of Alfredo Garcia has been reassessed in recent years. A sometime piano player (Warren Oates) and his lover (Isela Vega) discover one last chance for happiness, but that happiness slips through the fingers and leaves Bennie a shell of a man, determined to make good on promises of revenge that he doesn’t know he can keep.

Howard Hughes (Jason Robards) loses control of his motorcycle, crashes in the Nevada desert. A nobody by the name of Melvin Dummar (Paul Le Mat) stops his pickup to pee and finds a disheveled stranger lying by the side of the road. Refusing to go to the hospital that stranger accepts a ride and travel-time conversation. Melvin encourages his passenger to join him in singing a Christmas song he wrote. The stranger has Melvin sing his favorite song “Bye Bye Blackbird.” Melvin drops his charge at the Desert Inn and does not reveal his identity. Some years later, a limousine stops at Melvin’s service station and hands over a copy of Howard Hughes’ last will and testament naming Melvin a beneficiary. No one believes Melvin and soon he becomes part of a media circus. Now that I’ve told you the plot, I’ll also tell you that none of it really matters because Melvin and Howard is first and foremost a beautiful character study from Jonathan Demme. Headlined by Mary Steenburgen’s Oscar-winning performance, the film’s a surprising and understated gem of a movie.

Let’s add some more Jeff Bridges to this list. Another movie long overdue for elevation into the status of American classic. Panned and praised at the time of its release, Cutter’s Way features standout performances from Bridges and the always reliable John Heard. Czech New Wave writer/filmmaker Ivan Passer worked along Milos Forman on films like Loves of a Blonde (1965) and The Fireman’s Ball (1967) before defecting to the U.S. The financial failings of Cutter’s Way likely derailed his post-Czech New Wave career. This subtle, cynical, character-driven masterpiece reflecting the disillusionment of the post-Vietnam era deserves better.

Tune in tomorrow when I’ll highlight some 20th Century Fox titles that might warrant extra consideration. 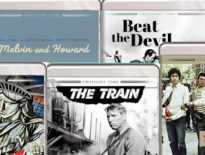