Nick Starkey : Frank, I got one thing to say to you, and it’s hard but I gotta say it. And if you can accept it, a lot of other shit’s gonna fall into place. Frank, Mom loved me more than you. That’s why I took the fall for you, Frank.

John Patrick Shanley’s Joe Versus the Volcano changes lives. No hyperbole. Just the facts. People who love Joe Versus the Volcano, myself included, speak of the film in spiritual ways. Shanley, a successful playwright, dabbled in Hollywood by way of winning the Academy Award for Moonstruck (1987) in 1988.

The little golden statue allowed him some room for experimentation. As a result, in 1989, MGM dared to make a noirish, romantic-comedyish, serial killer movie called The January Man. Despite starring the then red-hot Kevin Kline, fresh off A Fish Called Wanda (1988), The January Man made only $4million at the box office.

The ever gregarious New York Times critic Vincent Canby proclaimed: “The January Man is well titled. It’s a big-budget mainstream production that, in spite of its first-rate writer, director and cast, manages to fail in just about every department. It couldn’t have stood up to the competition from the slightly less bad films released in December.”

Regarding The January Man, I agree with Statler and Waldof

In my mind, Vincent Canby’s either the Statler or Waldorf of film criticism, but in this instance he’s not spitting wildly over the microphone as he works himself into a froth (as I’d imagine him if he were podcasting all his reviews). It’s rather clear that what appears on screen couldn’t have been Shanley’s original vision — that the producers of the film didn’t trust a wild-eyed young buck that had a mind for merging mismatched genres in an anti-hero and social misfit named Nick Starkey.

Scandalized and disgraced former NYPD detective takes his wild, self-destructive talents to the fire department before being called back into service by his jerk-store police commissioner brother (Harvey Keitel) and the mayor (Rod Steiger). Apparently Nick’s the only man smart enough to catch a devious serial killer murdering socialites. And apparently his brother married Nick’s ex-girlfriend (Susan Sarandon), for which Nick still harbors emotions. Police Chief Alcoa (Danny Aiello) hates Nick’s laissez faire attitude, but goes along with the reinstatement because the mayor says. Nick’s painter friend (Alan Rickman) comes along as his assistant, because in this New York City even the comedic relief are more capable of solving crimes than the police commissioner. Mary Elizabeth Mastrantonio pops into the picture as friend of one of the victims and practically serves as the romantic interest that gets Nick’s eyes off his brother’s woman.

Together the trio of amateur sleuths recognize that the police are barking up the wrong leads. When they arrest the wrong man, the powers-that-be close the case. Nick, however, believes the killer will strike again unless he takes matters into his own hands. Tune in for amazing on-screen 1989 computer computations, underdeveloped subplots and characters played by major actors that just disappear.

Finesse, Lost in The January Man

John Patrick Shanley’s script aims for dark thriller with light comedy and some romantic melodrama and sometimes it works and most of the time it really doesn’t. But it could have. It’s like you set up the board for a game of Clue, placed all the pieces and then chucked the board. (I’m sure that’s a perfectly clear metaphor.)

Without knowing anything about the production (because nobody proliferated Interwebs with minutiae in 1989), The January Man feels like a movie that had a killer script and somewhere along the way a “committee” got ahold of it and made it palatable for the lowest common denominator. They didn’t understand the quirks and redlined what would have made it unique. Kline’s disgraced former police officer turned fireman and painter Alan Rickman make for a fun pair of non-detectives solving crimes, but alas, it should have been so much more. Ideas are all over this movie — all setups without punchlines. It’s a 97-minute act two. Everyone other than Kline feels like wallpaper, and the murderer doesn’t even reach wallpaper status. (Does that make him shelf paper?)

The January Man probably claims the most DNA in common with Shane Black’s Kiss Kiss Bang Bang, an off-kilter murder mystery that wanders off in strange and unusual ways. Mismatched buddy cops. Love interests. Odd twists. Embrace the script at the level of character and let these characters find their own way — quirks, messiness and all. Shane Black knew how to direct a Shane Black script. Meanwhile Pat O’Connor (Circle of Friends) had absolutely no idea what to do with a John Patrick Shanley script other than herd it into a boilerplate serial killer movie.

With a cast featuring Kline, Rickman (fresh off his breakthrough in Die Hard), Susan Sarandon, Mary Elizabeth Mastrantonio, Danny Aiello, Harvey Keitel and Rod Steiger, a viewer could almost weep for the movie that never was. Sarandon’s character clearly hit the cutting room floor — but structurally her role (like many other elements we’ll never know about) colored outside the lines.

Kevin Kline’s Nick Starkey was meant to be a portrait of a man, wronged by the institution and his family, with an acerbic sense of humor. He’s not outwardly angry about his unfortunate fall from grace, he’s just going through life as best he can, which is to say, emotionally stunted and free from material distraction. At home only among his eccentricities and his oddball friends. These filmmakers took all that messiness and all those rough edges and tried to sand them down into something that would make sense for everyone. As a result, none of it makes sense. We laughed a bit but mostly scratched our heads and wondered what else we missed.

At this point in his career, Kline’s a legitimate movie star on the verge of being a superstar. Leading man charisma, a devilishly handsome mustache and easygoing charm. He deserved a movie that embraced his ability to play light but be dark and brooding beneath the facade. Audiences may not have known what to do with John Patrick Shanley’s original vision for The January Man (and it may not have made any more money) but at least we could have held it up as an underappreciated genre-bending thriller that dared to be unique and eccentric.

The January Man might not be perfect but there’s enjoyable characters buried in a haphazard mess of a movie. The January Man is available on Blu-ray from Kino Studio Classics. 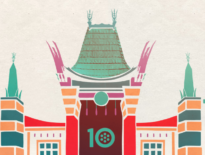 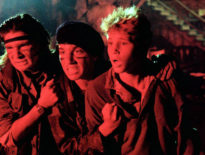