Last year I began hosting spooky outdoor movies around Halloween and inviting my daughters’ friends and their families. This year we projected The Creature From the Black Lagoon. Would it go over as well as last year’s screening of The Blob (1958)?

For me, it was my first Creature viewing in nearly thirty years.

‘The Creature From the Black Lagoon’ Elevator Pitch

An expedition to the Amazon hopes to find more fossilized evidence of the link between man and fish.

Watching Creature With Kids and Their Adults

An interesting phenomenon developed halfway through the film. Kids were cheering for the monster, and the adults (who hadn’t seen it) were worrying more about the archaeologists who were trying to kill the creature.

Like most of the classic Universal horror films, the studio tapped into a unique sense of pathos for the “monster.” The monster became the aggressor when it felt threatened by the aliens who’d invaded its secluded home along the Amazon river.

The simple premise played well with the kids who kept cheering for the Creature as he dispatched one unlikable human after another.

Final ‘The Creature from the Black Lagoon’ Thoughts

Creature never become an essential for me in the same way as the Mummy or the Invisible Man. This viewing allowed me to focus on the gorgeous underwater cinematography and balletic swimming sequences that must have thrilled audiences in 1954. As a technical achievement The Creature From the Black Lagoon is a marvel of B-movie entertainment. The Creature From the Black Lagoon: 31 Days of Horror 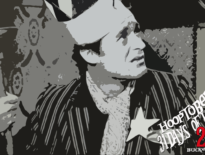