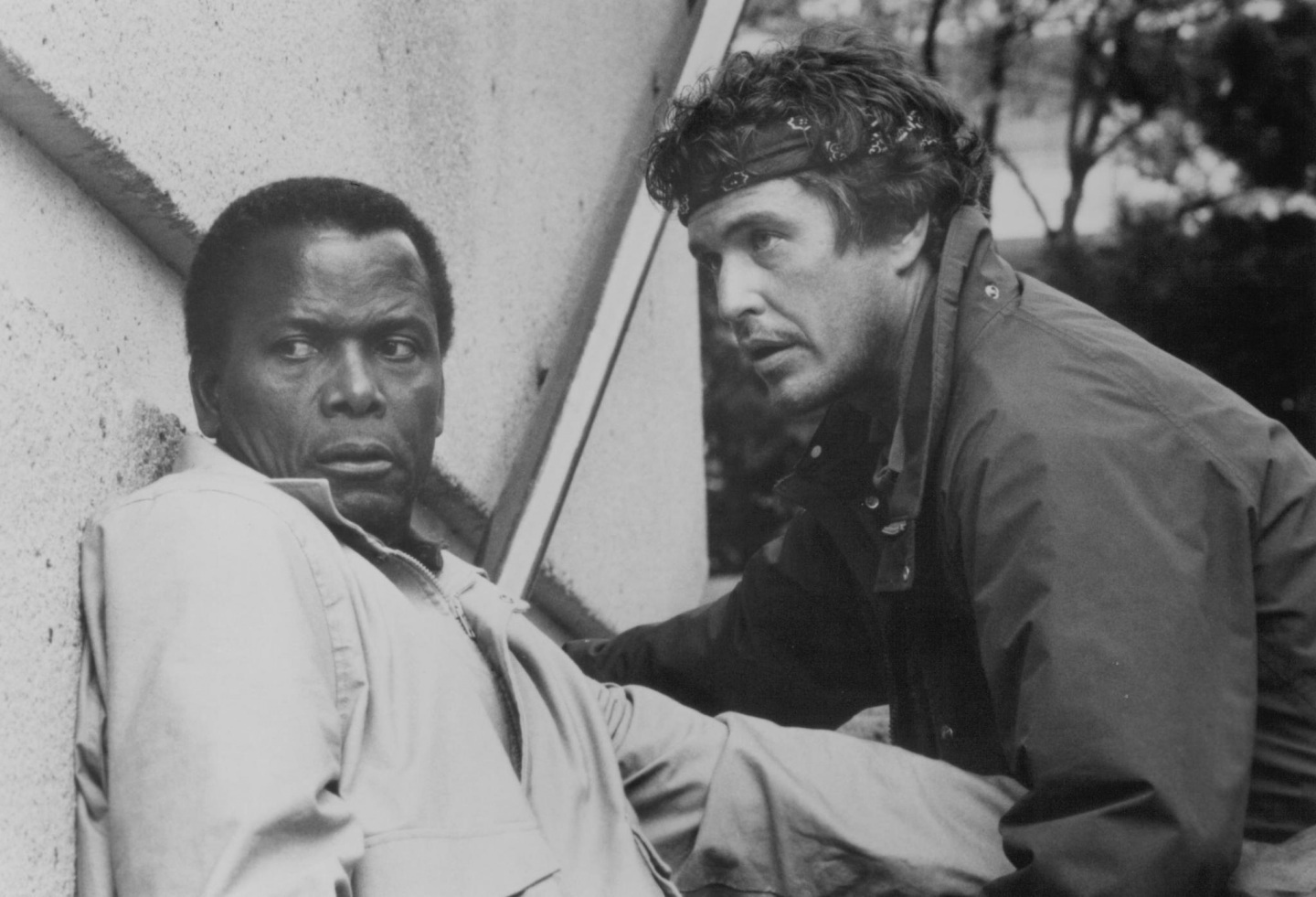 Everybody else up here acts like they’ve never seen a black man before. Why should the bear be different? –Sidney Poitier as FBI Agent Warren Stantin in Shoot to Kill (1988)

As I aim to fill in some of the fleeting gaps in my 80’s moviewatching resume, I’ll report on my progress in this general space. I believe I owe this viewing to a recommendation from Brian Saur of Rupert Pupkin Speaks and the Pure Cinema Podcast. His thoughts on Shoot to Kill prompted me to adjust my Netflix  queue accordingly.

A black FBI agent teams up with a grizzled white woodsman/tracker to hunt down a murderer who’s assumed the identity of a hiker and joined a group of weekend hikers in the Pacific Northwest and taken Kirstie Alley (she’s on a break from Cheers) hostage. It’s the bizarro 48 Hrs.! It’s Tom Berenger’s World After All

But this 1988 thriller has another claim to fame. Shoot to Kill boasts Sidney Poitier’s first big screen appearance in 11 years. After 1977’s A Piece of the Action (which he also directed), Poitier went behind the camera for his next three movies. During this time period Poitier directed Stir Crazy (1980), Hanky Panky (1982) and the dance battle flick Fast Forward (1985).

Meanwhile Berenger’s star had reached it’s zenith at the tail end of the decade after starring in Oliver Stone’s Platoon (1985) and Ridley Scott’s underrated (and steamy) thriller Someone to Watch Over Me (1987). The buddy cop premise, a reliable holdover from 1970’s cinema, held strong throughout the 80’s. Tossing two mismatched characters together on a quest to achieve a common goal often creates instant tension and comedy. The concept done well results in entertainers like the aforementioned 48 Hrs. (1982), Lethal Weapon (1987) and Midnight Run (1989). Also, I’d like to throw out a special mention for the The Nice Guys (2016) just because it’s always worth the keystrokes.

Race Relations of the 1980s

Racial tension regularly figures into these scenarios, and Roger Spottiswoode’s Shoot to Kill offers its share of quips about a black man lost in the woods. Spottiswoode’s film never turns Poitier into a racial caricature because it already established Poitier’s FBI agent as hardboiled and utterly capable of navigating urbanity. He’s just city folk, and Knox (Tom Berenger) is a reclusive woodsman whose irascible personality has earned him few friends where there were already few friends to earn.

Though I do take a small issue with the film’s comical insistence on making FBI agent Warren Stantin an action hero. Poitier, who was in his 60’s by this point, hurdles over police cars (when running around them would have clearly been faster) and spends large portions of the film sliding and leaping and running. Even though I know the legendary actor’s still with us, I legitimately felt concern for his retrospective health. It’s not that Poitier’s giving a bad performance here — it’s just that he seems constantly uncomfortable handling the required and sometimes unnecessary physicality. Humor comes easy between the actors. I’ve always felt that Berenger had a natural gift for understated drollness. As the two are forced to pursue the murderer (the always terrific Clancy Brown) and his hostage through remote wilderness, the isolation brings out the dramatic and comedic best in both.

As a genre film, Shoot to Kill excels at expeditiously delivering its premise. The mismatched heroes begrudgingly work together for the moral good and come to respect each other during the process. Ruminate too hard and you’ll expose plenty of questionable narrative decisions. Filling the gaps likely would have killed the film’s momentum. (Can a handgun kill underwater? Wouldn’t Sidney have broken a hip with a leap onto a departing ferry? Why don’t we have more FBI agents on this case?)

Rides like Spottiswoode’s Shoot to Kill don’t need airtight logic; they just require charismatic leads navigating escalating tension with a few laughs about their incompatibility. In that respect, anyone looking back to 1988 with any eye on “a bandanna-clad Tom Berenger hauling 61-year-old Sir Sidney through the woods” thriller won’t be disappointed.

Fine genre entertainment, even beyond those of us who wax nostalgic for the days when Tom Berenger headlined action thrillers. Shoot to Kill (1988) is available on a ragged 2003 DVD from Amazon. It is at the very least anamorphic, but the print could use significant cleanup. Considering it was released by Touchstone Pictures (Disney), I don’t have much hope that this will reach Blu-ray anytime soon. Disclaimer: I earn rewards from DVD.Netflix.com, which has thousands of movies to choose from, many that you won’t find on streaming services. I do this because the availability of physical media is important. The notion of “everything available all the time” with streaming is a myth. We are our own best curators. #PhysicalMedia #DVDNation #ad 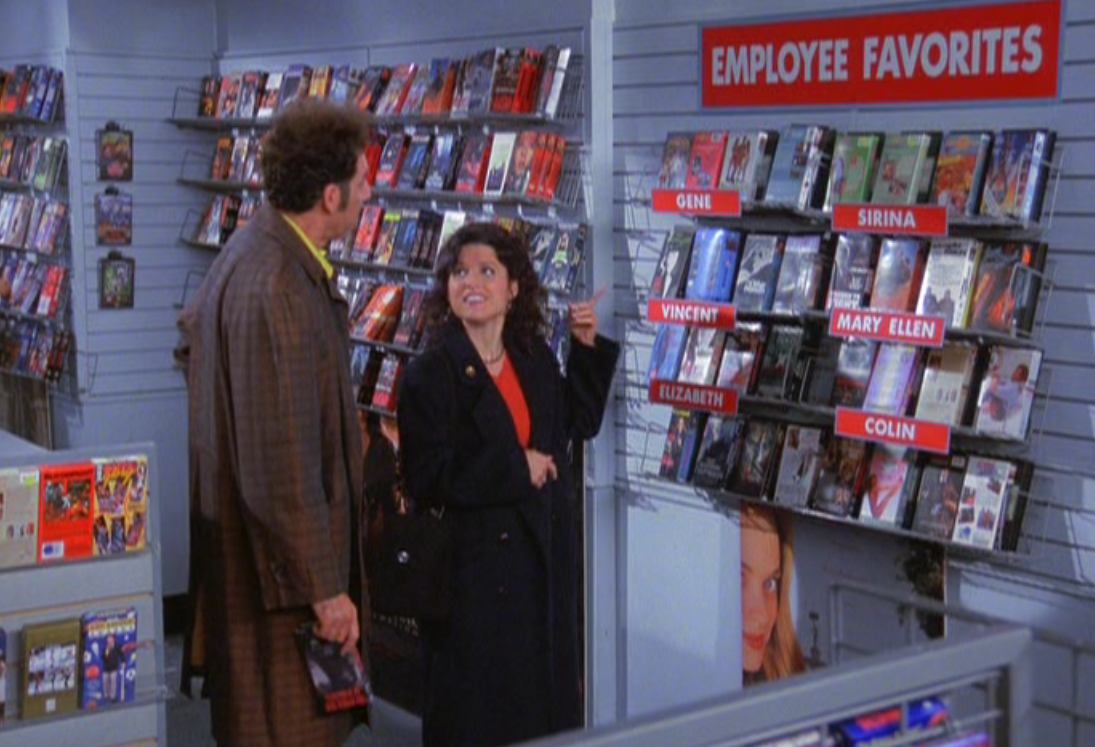 30Hz Bl-g Gene’s Picks, Netflix, and the War on Physic…