I haven’t yet written a proper piece about Tim Burton’s Batman (1989) as part of my efforts to watch or revisit every major Hollywood movie released in 1989, so I figured it was long past time to revisit the movie that redefined the cinematic superhero by celebrating Jack Nicholson’s Joker for The Great Villain Blog-a-thon 2019!

The Importance of Being Jack: Jack Nicholson’s Joker in Tim Burton’s Batman

Tim Burton’s Batman (1989) places Michael Keaton’s Batman and Jack Nicholson’s Joker on unstable moral ground. They’re each branded at different times social outcasts or saviors of Gotham through the news media, and the film itself is about the manipulation of public opinion through the press. (Even typing that sentence in 2019 made me wince due to our current state of political affairs.) Likewise, the film’s narrative provides a playground for intertwined character arcs. The Joker presides over Batman’s origin story just as Batman presides over the Joker’s transformation at the creation of his permanent, toxic grin.

Gotham City Always Brings a Smile to My Face

Since the Joker’s on everyone’s mind with the buzz concerning the release of Todd Phillips’ Joker later this year, it seems the perfect time to reflect upon the iteration of the Joker that brought the character back into the cinematic consciousness. First, however, it’s entirely relevant to trace back the origin of the Joker. Created by Bill Finger, Bob Kane and (maybe?) Jerry Robinson, the Joker made his debut in the debut issue of Batman on April 25th, 1940 (about a year after Batman’s first appearance in Detective Comics #27). The team had originally killed off the character in that very same issue, but a last minute editorial “intervention” allowed the Joker to survive the issue and ultimately become Batman’s archenemy.

The criminal mastermind first appeared as a psychopath with a sadistic sense of humor – the relative levels of depravity dictated by didactic cultural trends and authoritative censorship of the moment. Most generally, the Joker, with his bleached skin, green hair, red lips and preference for chaos over order serves as Batman’s aesthetic and moral antithesis.

The source of the character’s iconic visage predates even his first comic appearance by twelve years. Robinson fed Bill Finger scattered ideas about his personality. Finger took these notes and for his first concept sketch of the joker drew from a picture of Conrad Veidt’s Gwynplaine in Paul Leni’s silent masterpiece The Man Who Laughs (1928) — a movie I plugged on Netflix’s Inside the Envelope earlier this year.

Like the Joker, Gwynplaine has become disfigured with a permanent grin. He becomes a freak show in a traveling carnival. Unlike Victor Hugo’s source novel, Leni’s film allows for a happy ending and a measure of solace for its tortured protagonist. Not so for our Joker – who from the earliest stages of creation had been earmarked to become Batman’s Moriarty. (It should be noted that Finger, Kane and Robinson disagreed about who actually played a hand in the character creation. Finger and Kane say Robinson had nothing to do with it beyond bringing in a Joker playing card. Robinson meanwhile gives himself a full one-third credit.)

The Town Needs an Enema

Considered a dormant property through the 1970’s the notion of a Batman movie gained traction after the success of Superman (1978). Producers Michael Uslan, Benjamin Melniker, Jon Peters and Peter Gruber pitched the project around Hollywood until Warner Bros. decided to accept the film on its production slate in the early 1980’s.

A 1983 script by Tom Mankiewicz floated around for a number of years (with filmmakers like Ivan Reitman and Joe Dante attached at various points), but Warner Bros. eventually attempted to woo to a hot young director by the name of Tim Burton, fresh off his first success Pee-wee’s Big Adventure (1985). Burton contacted screenwriter and comic-fan Sam Hamm to write a screenplay. Hamm dispensed with the origin stories that had been a focus of earlier drafts and used flashbacks to help “unlock the mystery” of the Batman.

After Beetlejuice became a surprise box office success, Warner Bros. finally put up Tim Burton’s bat signal. It was producer Jon Peters who suggested Michael Keaton for the role of Bruce Wayne (despite public skepticism from his partners), having seen the comedic actor’s nuanced dramatic performance in Clean and Sober. With WB blessing the Keaton casting decision, Burton officially agreed to direct the film.

Haven’t You Ever Heard of the Healing Power of Laughter?

Casting the comic Keaton (best known for films like Beetlejuice, Johnny Dangerously and Mr. Mom) coupled with a director best known for Pee-wee’s Big Adventure caused protests and widespread panic that the movie would reflect the campy 1960’s TV series. The next step, publicly casting the Joker, had to assuage premature and unfounded concerns about the film’s tonal direction. Jack Nicholson had been the first choice of producer Michael Uslan and Bob Kane (acting in an advisory role) since they first tried to pull the project together in 1980.

Tim Burton wanted to cast Brad Dourif, but the actor’s name carried no cachet. Other actors like Robin Williams dropped their own names into the contest, but “Jack” remained everyone’s first choice. Nicholson finally acquiesced but made a number of specific demands  in his contract, including top billing, the number of hours he would work each day, the number of weeks he’d be willing to shoot, and days he’d need off to attend Los Angeles Lakers home games. Costume designers took a number of cues from Cesar Romero’s wardrobe in the Batman TV series just as Nicholson borrowed mannerisms from Romero’s flamboyant histrionics. Despite the similarities, Nicholson’s Joker became a creation distinctly “Jack.” It would be easy to trace Nicholson’s “Clown Prince of Crime” back through his own roles in films like The Shining and The Witches of Eastwick. Here was a legendary acting icon taking hold of a comic book villain and molding it into something new and cinematic. Romero had owned the small screen 21 years prior, but Jack commanded the big one. For many (like myself) it was their first chance to see a live action Batman, and The Joker immediately became the greatest on-screen villain since Darth Vader. Manic and unpredictable, Jack’s Joker portrayed a brand of nihilism that felt dark and dangerous but oddly relevant in that some of his “crazy” actually made sense.

The Pen is Truly Mightier Than the Sword

Tim Burton populated his Gotham City with moral grey. Neither was the Batman wholly altruistic (as was the case in Adam West’s incorruptible incarnation) nor the Joker purely, soullessly evil. Just like advance, pre-release buzz on the film, the war between Batman and the Joker played out in the public sphere. The enemies waged a cerebral war of information rather than a physical struggle.

In keeping with the notion of Batman and the Joker being two sides of the same coin, the characters shared nearly identical screen time. Bruce Wayne/Batman appeared on screen for 32:30 while the Joker clocked in at 32:15. Burton made the Joker a primary character — and rightfully so. The audience couldn’t focus on anything else but Nicholson and his purple suit and bleached face makeup. The Joker’s nihilism played into the film’s narrative construction as well. Take for example the scene in which the Joker and his goon’s deface the Gotham City Art Museum. I particularly enjoy this scene because it almost entirely serves the development of the Joker’s character. Set to Prince’s “Party Man,” Nicholson defaces the paintings with a swath of paint and a comedic malice. He’s destroying priceless works of art for his and the viewer’s own entertainment. Burton gives The Joker the best lines, the best scenes and the best asides. None of this, of course, should suggest a deficiency of Michael Keaton’s Batman. By nature the reclusive Bruce Wayne would stand back, observe and protect. The Joker steals the spotlight while Batman hides in the neighboring shadows. Such little confrontation actually takes place in Tim Burton’s Batman that it’s misleading to consider it an action movie at all — a construction that would surely confound modern superhero aficionados visiting Batman (1989) for the first time.

Tim Burton created a superhero character study that wowed a generation of moviegoers. For many including myself, Batman remains an iconic, untouchable piece of their childhood. I walked out of the Plaza 2 in Kalamazoo, MI a changed 10yo human. It became a landmark moviegoing experience, the black letters on the while marquee emblazoned on my brain.

That summer of 1989 came to define the ultimate moviegoing summer, in no small part because of my immediate affection for Batman. I can pinpoint the day and date that I became a proper cinephile, thirsting for more and more cinematic exposure. I began a quest to watch every Michael Keaton and every Jack Nicholson film. I’d dub rental tapes and a log them chronologically on a divided shelf. The left side for Michael Keaton, the right for Jack. There’s no other explanation for my affection for The Squeeze (1987). I wouldn’t learn about the troubled behind-the-scenes production or the disastrous studio distrust of Tim Burton until much later. For many years I’d imagined a perfectly honed vision, a delicate balance of comic mania and brooding malaise. But in many ways that more recent realization almost deepens my fascination with the film — how so many incompatible voices could stumble into something so iconic.

The only thing that maybe the producers had a handle on seemed to be the casting — despite clamorous dismay, they followed through on Michael Keaton and snagged their big fish in Jack Nicholson. After that everything just fell into place, more or less, despite Tim Burton’s skepticism and the studio’s meddling. 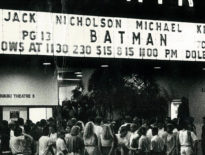 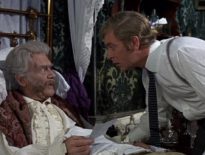 Cinema Michael Caine: The Right Man in The Wrong Box
0