I turned the calendar over to January, which means two things. I posted my Top 100 songs of the past year on Spotify, and it’s time to take stock of my year in moviewatching for Cinema Shame.

I’m sure it should signify something else, too, like committing to being more patient with my kids or vowing to do yoga at least once week. I’ll work on those, too. I will. (I really would like to do more yoga because my back is a mess and I have to clean out the basement for some home renovation.)

That’s a post for another day. I’m redoing the home theater setup and all my physical media is currently living in boxes and I only kinda sorta know where everything is and I kept some stuff out, like stuff I needed to keep out for Cinema Shame podcasts and manuscript research but mostly I feel empty, like the bookshelves that used to house all my DVDs. [Exhale.]

I’ve gathered some old Shame that I never got around to watching and I’ve merged it with some new Shame and presto bango I’ve got a new list for 2023. Check out the 2023 Cinema Shame call for Shame here.

It’s been on the list since 2018 and at this point not watching it might be the point.

Not even the 1972 Shamedown prompted me to put this DVD in the player.

Since I need to write a blurb about this one for a DVD Netflix article I’ve got in the works, it’s time to watch the 4K disc I purchased last year. Seriously, guy.

My co-host on the Cinema Shame podcast will probably club me like a baby seal for this one.

The variety of Shame in which I’ve watched the other Tarzan movies of the period (because pre-code swimming nudity!) but not the original? Here’s a video I recorded at the 2019 TCM Film Festival about the creation of the Tarzan yell.

Many people consider this the best movie of 1983. I just see a very long space melodrama without any pew pew pew. I’m sure it’s good, but my boosters aren’t firing.

You can still count the number of non-samurai Kurosawas I’ve seen on one hand.

Once again I’ve consulted my favorite guide for new entries on this list. The Entertainment Weekly Guide comes out once a year when I mark off movies I’ve watched and add movies I need to watch to this list.

It’s the next man off the bench in the book’s list of Best Dramas, checking in at #30.

I honestly can’t remember if I watched this one. It checks in at #42 on the Comedy countdown, so we’ll give it a spin. If it turns familiar, I’ve got Adam’s Rib waiting in the wings, another movie I think I might have watched at some point or another.

The second Wyler comes to me courtesy of the AFI list. It’s a movie I studied in film school, but never watched all the way through. Despite that, I knew it really well. There was never a sense of discovery about it. Time has passed. I’ve forgotten everything I knew.

BFI says. I’ve started this one twice, late at night during Hooptober Horror marathons, and fallen asleep. Not the movie’s fault. Now I’m staring down the 1973 Shamedown episode in a month or two.

Sight & Sound made a statement by making this their #1 film in 2022. That I haven’t seen the #1 movie on Sight & Sound cannot stand.

It’s so much a movie I should have watched by now that I have to remind myself that I haven’t actually.

Noah Baumbach adapted my favorite novel, Don DeLillo’s White Noise, for the screen. I anticipated it eagerly. This made me wonder why I haven’t watched the cinematic adaptation of my other favorite novel… a movie that’s been available to me my entire life. It’s just right over there waiting to be watched.

Own up, friends. Let’s make a promise to watch some excellent movies in 2023. Not much is going right in the world, but we can definitely tend our own gardens, watch great movies and talk about them on the Internet. 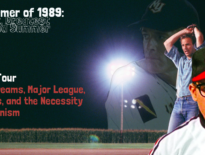 Cinema Field of Dreams, Major League, Roy Hobbs, and The …
0