Zach: You know what I feel like saying to you?

Dr. Westford: Yes. You feel like telling me to go fuck myself, and you probably will, because it’s your character.

Zach: See you next Tuesday. What is it with Blake Edwards, weird beards, and unhealthy relationships with women? Because Blake couldn’t get enough of all these things in The Man Who Loved Women (1983) with Burt Reynolds, he’s back to the grindstone with Skin Deep. John Ritter’s deeply troubling facial hair reflects the grotesque human that is Zach Hutton beneath the Jack Tripper skin.

I’m sorry. I’m not ready to move on yet. It’s just such an awkward length. No one grows a beard like that, a don’t tell me it was just “the 80’s” and shrug.

John Ritter plays an unrepentant alcoholic womanizer who says he wants to change but does everything he can to preserve his selfish, self-destructive ways. He compulsively chases every pretty skirt, his wife leaves him, his agent’s dying, and he gets arrested for drunk driving on the average Tuesday.  It’s Clean & Sober (1988) or Leaving Las Vegas (1995) wrapped in screwball gift wrap.

The differences in John Ritter being a huge dick and Burt Reynolds being a womanizing asshole boasts so many unsubtle nuances. While I like Ritter in most everything, he’s a little out of his element here. His travails feel utterly pathetic rather than symptomatic. Skin Deep doesn’t do enough to differentiate his legitimate metal illness from his leering, roguish tendencies. At a certain point Skin Deep can’t even highlight any of the character’s redeeming qualities. The viewer must believe that women cannot resist Ritter’s Zach — that their attraction to him occurs at such a primal level that his face value inadequacies fail to pose obstacle to copulation or god forbid, a relationship. We don’t, and yet every single woman that crosses his path cannot help but be pulled into his black hole. He’s amiable, but he’s no Rudolph Valentino… or Burt Reynolds.

That said, the movie still has something to say about alcoholism. It’s just buried a little bit deeper than you would have liked. Blake Edwards has attempted to delve into the unrepentant mind of the alcoholic through a haze of farce and bleak humor all while serving up a puerile and unlikable anti-hero. The women needed more time to become human rather than brief caricatures and conquests. Even the woman that’s supposed to ultimately change his life feels like a cardboard standup that walked out of Blockbuster Video. It’s a scriptural-level problem that will cause many people to tune out before the 30-minute mark. No amount of Ritter charm could make that completely palatable.

If you can overcome a rough start, the movie offers a few base pleasures, namely one truly inspired comedic set piece. Zach overcomes his crippling erectile dysfunction by turning his penis into a lightsaber. It’s true. This happens. The bit reminds us all that Blake Edwards had some creative demons, but we reaped the benefits of that mania though the beauty of glow-in-the-dark penile slapstick.

I hadn’t caught up with Skin Deep until this #Watch1989 exercise because it’s just never seen much fanfare. It certainly wasn’t a film I caught at the Multiplex during it’s theatrical run and it’s never received a Blu-ray release. Skin Deep has its proponents, but there’s not a lot here to recommend over a dozen other movies that dare explore the effects of alcoholism on-screen.

There’s just enough that works beyond glow-in-the dark penises to warrant a watch. I would be remiss if I didn’t acknowledge that the movie dishes out a number of quotable exchanges and enough Ritter charm to smooth out the roughest edges. It might be personally damning, but if I’d seen this movie at a more formative age, I have no doubt I’d be a Skin Deep fan.

Skin Deep is available to view on Amazon Prime Streaming. 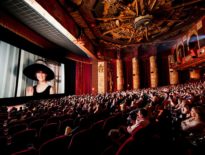 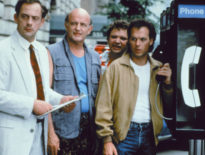