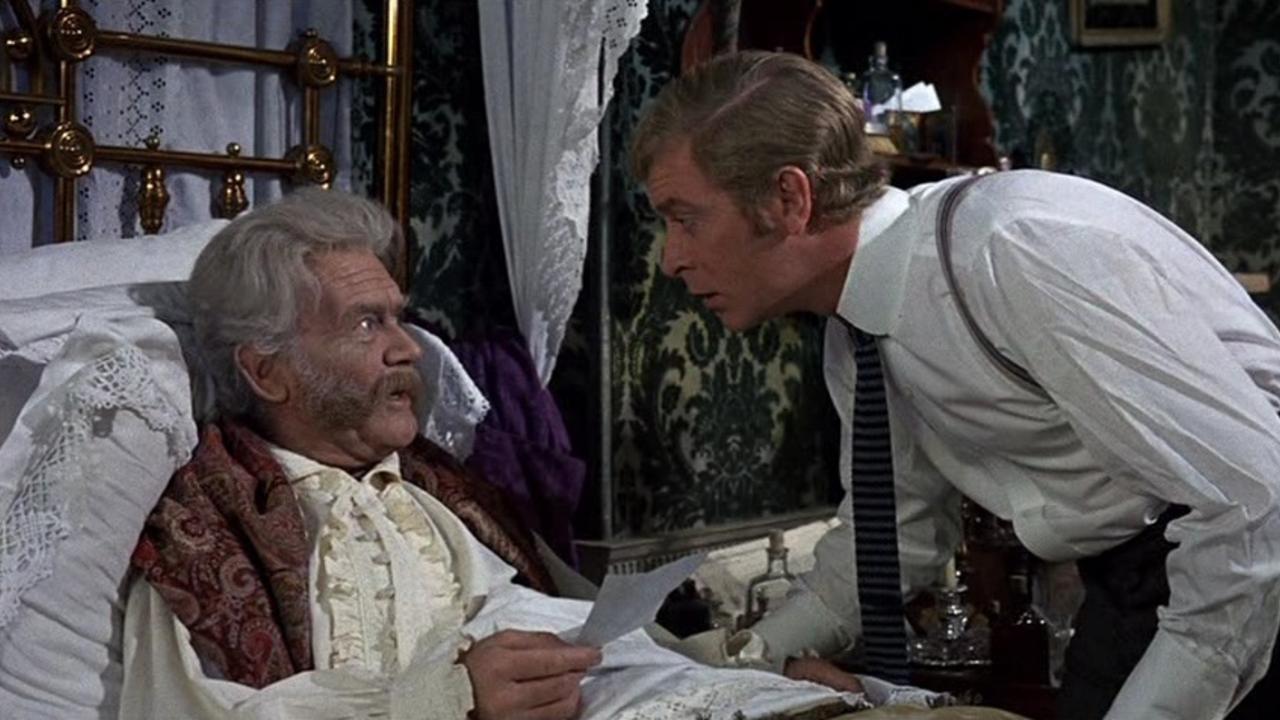 A bookish, bespectacled Michael Caine watches a girl enter the house next door, doe-eyed. An intertitle, as if drawn by Jimi Hendrix’s cover artist, appears on screen. “The Girl He Worships From Afar.” He’s called back to the bedside of his gasping grandfather Masterman Finsbury (John Mills) who says, “I believe the time has come… at last…” before falling limp. Michael Caine solemnly draws the sheet over his grandfather’s face. A moment later the man frantically throws the sheet away. Masterman: “Not so fast! You’re a very quick man with the sheet, Michael!”

Masterman: “Death cannot be assumed simply because signs of light are not present. Hasn’t that medical school taught you how to take a pulse?”

Michael: “We have touched on it, sir, but mostly we cut up things.”

The Wrong Box, The Bleakest, Blackest of 60’s Comedies

So introduces two major players in perhaps the most bleak and British of all 1960’s bleak and British comedies. The Wrong Box concerns the last two remaining brothers (John Mills and Ralph Richardson) in a family tontine and the various plots by their would-be heirs to come into extreme wealth. Tontine: n. – an annuity shared by subscribers to a loan or common fund, the shares increasing as subscribers die until the last survivor enjoys the whole income.

Written by Larry Gelbart (Tootsie and the M*A*S*H TV series) and Burt Shevelove (his only feature screenwriting credit) and based on an 1889 satirical novel by Robert Louis Stevenson and his son-in-law Lloyd Osborne, The Wrong Box stuffs itself full of Victorian anti-manners. British humor is best served when it explores the latent eccentricities of our dark and mangled human nature, and The Wrong Box lays bare our character foibles and exploits the human condition for giggles. Oh the hilarity of the misplaced mutilated body in a barrel gag! Murder plots! Making light of the tottering and impossible old and senile butler! High-speed horse-drawn hearse chases!

The film prefaces its narrative with a properly droll sequence depicting the unfortunate deaths of the brothers’ family members, a callback to Ealing Studio’s Kind Hearts and Coronets (1949). 18 relatives are dispatched by careless queens, unstable mountain peaks, and charging rhinos. Released only two months before The Wrong Box, Alfie (1966) made Michael Caine a star of the British screen.

At the stoic center of a large ensemble cast (including scene-stealers Dudley Moore, Peter Cook, and Peter Sellers), resides Michael Caine. Coming off a three-film run of Zulu (1964), The Ipcress File (1965) and Alfie (1966), Caine already feels bigger than the role. This owes partly to our conception of a proper prime Michael Caine vehicle, but also because of the timing of the film. He’d likely not have taken on the role of Michael Finsbury, the naïve and lovelorn straight man in landscape of eccentric and inept grifters, had Alfie (released only two months prior) elevated his status as a bankable star before the filming of The Wrong Box.

His grandfather, Masterman Finsbury, yells after him, “Nothing will upset me more than not winning the tontine and leaving you with a mountain of debts and a doubtful future as an idiot in a profession of rogues and charlatans. So go and get (my brother Joseph) and tell him I died!”

The families of each remaining brother are torn between forcibly keeping them alive or knocking them off to ease the burden of dealing with the tottering fools, but of course pretending they’re still alive to dupe the other family into conceding the tontine. Consider The Wrong Box a proto-Weekend at Bernie’s, except surreal, British, and much darker.

Morris (Cook) and John (Moore) believe their uncle Joseph (Ralph Richardson) has died and prop up a corpse to perpetuate the belief that Joseph’s indeed alive and kicking. Meanwhile, Michael (Caine) has falsely reported the death of Masterman, causing a chain reaction of erroneous judgment. The Wrong Box blissfully devolves into anarchic slapstick and chase sequences as the twisty narrative unfolds and the characters grow more desperate.

Director Bryan Forbes (The Stepford Wives) clearly found inspiration in style and substance from the great Ealing comedies of the 1940’s, chiefly the aforementioned Kind Hearts and Coronets. The “otherwise decent people doing horrible things” genre boasts a grand (especially English) tradition, and The Wrong Box updates that formula for the 1960’s by tenuously straddling the line between good taste and outright offense. Because it’s all said with a stiff upper lip and a fine British accent, it’s hard to find fault even when the movie wanders into questionable moral territory. So why would I bring up The Wrong Box in a Michael Caine-centric blogathon if he merely played a dim straight man to his comic co-stars? We’d have to go back a little bit to look at the tradition of the double act comedy routine. The double act, or comedy duo, which later manifested as Abbott and Costello, Burns and Allen, and Laurel and Hardy, began in the late 19th century in British music halls and American vaudeville.

In these bawdy performance venues, the acts employed the straight man to repeat the comic lines for those that didn’t hear jokes the first time around. As the language evolved, the dynamic shifted, and the straight man set up jokes for the comic to deliver a punch line. While the comic often gets the showiest lines or gags (consider Abbott and Costello), the straight man can sometimes blend into the background.

Burns and Allen, for example, swapped roles, making Gracie Allen the comic once her stage personality blossomed. It’s easy to forget that George Burns was actually the cigar-chomping straight man of that duo. Gracie delivered all the punch lines. Peter Cook and Dudley Moore had already established the rapport of long-standing comic duo. Cook’s alcoholism would eventually cause a premature dissolution of the team.

The British form of the comic duo – even more so than the American – relied on comic timing and glib entendre. The roles of “comic” and “straight man” became blurred and often interchangeable. Peter Cook and Dudley Moore innovated by doing away with the set-up and punch altogether and weaving discourse through their routine. Cook and Moore had risen to popularity as half of the stage revue Beyond the Fringe. Their TV show Not Only… But Also had also begun a year before The Wrong Box, their big screen debut. Their immediate on-screen chemistry resulted in steady work through the end of the 1960’s in Bedazzled (1967), The Bed-Sitting Room (1969) and Those Daring Young Men in Their Jaunty Jalopies (1969).

The Importance of Being Michael Caine In The Wrong Box, it’s Michael Caine’s job to anchor the film with a relatively steady moral compass (except for the bit about wooing his supposed first cousin) and a consistent, subtle (relatively speaking) comic tone. He is the mannered totter upon which the movie’s lunacy teeters. Without his steady, even performance, the farce would have become a manic, punch line competition between his more comedically trained co-stars. That’s not to suggest that Michael Caine couldn’t hold his own among proper comedians. He undoubtedly proved his comic versatility as the straight man to Steve Martin in Dirty Rotten Scoundrels and the comic to Ben Kingsley’s straight man in Without a Clue. Caine with Ben Kingsley in the fantastic (and underseen) Without a Clue (1988).

“Thank you for the tea and cakes,” he says, plainly, to his beloved cousin Julia (Nanette Newman) after an afternoon rendezvous, “I shall devour them throughout my dissection class.” As he’s leaving her house, he unwittingly helps receive a box the audience knows to contain a corpse. So it goes in The Wrong Box. Many of the best single lines in the film occur between Caine and Newman as they’re allowed to play roles dressed with proper British formality. Just wait for Julia Finsbury’s description of her parents’ untimely demise.

The pulse of Michael Caine’s performance can best be displayed in this exchange with Peter Cook’s Morris.

Morris Finbury: I know you are a medical student, cousin, so I need hardly remind you that blood is thicker than water.

His abhorrent family schemes and plots all around him to take the tontine. Even when confronted with that malfeasance he still responds clinically and rationally. Morris wants to invoke an unwritten clause regarding the bonds of family and the dim Michael recites medical facts – the straight man can still deliver the straightest lines and still get the big laughs though gifted timing and charisma – two aspects of Michael Caine’s performances that have never been in doubt. It would also be an unforgivable sin not to mention John Barry’s score (his third of five collaborations with director Bryan Forbes). Barry, like Caine, dresses the film with elegant tradition but nimbly shifts into wistful romance or rollicking adventure when the situation demands. In “Tontine Box is Put On Hearse,” you’ll note echoes of Barry’s “007 Theme,” the James Bond action theme first used in From Russia With Love (1963).

Somehow the manic, bleak, hilarious film holds together despite the breakneck speed of a runaway, horse-drawn hearse. So jammed with quick verbal jabs and sight gags, two viewings of The Wrong Box might not even be enough to understand the hows and whys of this miracle execution.

The Wrong Box is available on Blu-ray from Indicator and DVD from Sony Pictures Burn-on-Demand. Sellers’ role amounts to little more than a cameo, but his cat-loving Doctor Pratt gifts the viewer two perfect scenes in The Wrong Box.